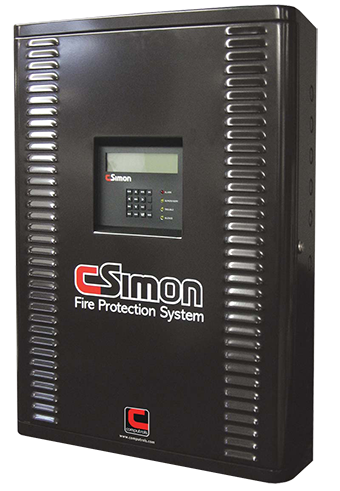 Why shouldn’t your fire system be as easy to operate and maintain as the rest of your building automation? The CSimon fire protection system not only delivers cutting edge analog addressable fire detection and control, but it also integrates seamlessly with 3rd party devices as well as Computrols’ legendary CBAS software. Each CSimon panel boasts an on-board high-speed TCP/IP network connection, complete stand-alone operation, and a powerful yet simple user interface.

Operating System
The operating system is based on Computrols’ well-known CBAS, and the system is programmed via a user-friendly computer-based CBAS programming system.

Master Control Unit
The Master Control Unit (MCU) serves as a basic information and control center for standard operator functions. The user interface consists of a 320×64 graphical LCD with an enhanced soft-touch keypad and provides both system operation and troubleshooting functions. An RS-232 port provides supervised output to a UL864 listed printer. The system has dual switching power supplies for reliability and a built-in microcontroller-based adaptive battery backup system that maintains sealed lead-acid batteries up to a 55 amp-hr capacity. The MCU supports 5 SLC cards. Each SLC card supports 1 class A SLC circuit or 1 Class B SLC circuits.

Auxiliary Unit
Every CSimon system can be expanded by adding up to 16 Auxiliary Units, each of which provides the same capabilities as the MCU.

Walk Test
The walk test feature is performed on a signaling line circuit or zone basis and enables testing of the system by a single person. While in walk test, service technicians can manually produce alarms and trouble signals, thereby verifying their operation without triggering alarm sequences and disturbing tenants.

Drift Compensation
The CSimon fire panel continuously monitors all installed analog smoke sensors and identifies any that fall outside of specified parameters. The drift compensation software is built into the smoke sensors and overcomes effects of aging or environment on sensor sensitivity, providing a depend- able alarm threshold. Sensors automatically change sensitivity with time-of-day to be “matched” to their real-life environment.

With our recent UL listing (UL864 Ninth Edition), the system is now authorized for distribution. This panel integrates fully with Computrols’ CBAS software and performs a multitude of functions rarely found in any one existing fire system currently on the market. The system supports end field devices from Apollo, Edwards, FCI, Fire-Lite, Honeywell and Notifier for both Class A and Class B systems.

The main system, or MCU (Master Control Unit), accommodates up to 5 SLC cards, each supporting either 1 class A SLC circuit or 2 class B SLC circuits. Depending on the configuration, a single MCU can support over 600 end field devices. In addition, each MCU can utilize up to 16 slave units to provide ample coverage for most any application.

One of the features of the system is a walk test allowing for devices to be put into alarm or disconnected from the system without any notification devices being activated. You may select to enable the walk test either by signaling line circuit or by zone. All changes to the system can be recorded to an optional UL listed printer.

10-Story Retrofit.pdf (422 kb)
A typical retrofit installation with Computrols equipment including all Automation and fire controls.

15-Story Building Topology.pdf (457 kb)
An example of a CSimon Fire Panel installation for a 15 Story building.

Campus Topology.pdf (401 kb)
An example of a CSimon Fire Panel installation in a multi-building scenario.