Home » What We Do » Our Clients » Building Automation Case Studies » Case Study: UAMS 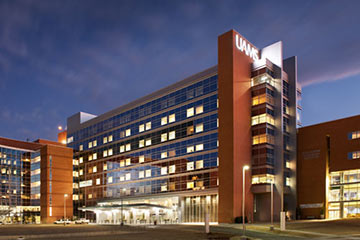 University of Arkansas for Medical Science

Campus-style layout with over 5 million sq. ft. of facility space

Get a simpler to use front-end to gain better control over their fire alarm system.

Former service partner closed up shop and could only get remote support.

The University of Arkansas for Medical Science (UAMS) campus encompasses more than 84 acres and is located on Markham Street in Little Rock, AR. The university moved to the property in 1956. The campus includes an estimated 5,200,000 square feet of buildings.

In 2016, the facilities team at UAMS was looking to replace their aging fire and life safety system in the clinical areas of their campus. The existing equipment and software was a Honeywell FS90 system that was installed by a defunct service provider and no longer supported by the manufacturer. Whenever there was an issue with the system, the staff had to call for remote support from a third-party provider but could not get any onsite assistance. Given this situation, the UAMS team was in desperate need of a fire alarm system that they could manage internally while also having access to an authorized local support representative. They also wanted to avoid the issue of product churning and planned obsolescence so they would not be left in this situation again.

Computrols Distribution Partner, Williams Mechanical, won this project and began executing the fire alarm retrofit in April of 2016. This job encompassed approximately one quarter of the expansive UAMS campus. With guidance from the Computrols team, technicians replaced the FS90 system with eleven Computrols’ lifetime warranty CSimon panels. They also installed and integrated to an Evax system and replaced all end devices with the exception of the pull stations, horns, and strobes.

At the completion of this project, the UAMS campus was equipped with a fire alarm system that would ensure the safety of their patients, staff, and other building occupants while giving their engineering staff the ability to operate the system in-house. They now also have the support of a knowledgeable, local service partner in Williams Mechanical as well as remote support from the manufacturer, Computrols.