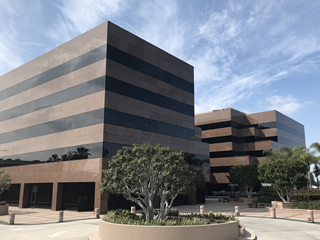 To pull in multiple building automation manufacturers’ hardware under one intuitive head-end software.

To have the flexibility to control the building automation system in-house and generate customized sequences to make the building more energy efficient.

South Coast Executive Center is a Class A office composed of two five-story buildings, totaling 166,642 square feet. When Computrols came in, these buildings were being managed under the same building automation system as two office buildings at Harbor Corporate Park just a few miles away.

The existing building automation hardware in these buildings included devices manufactured by Alerton, Johnson Controls, and Siemens. There was also additional equipment which communicated through the Modbus protocol. These four buildings had chronic HVAC issues caused by a convoluted controls system that could only be managed by their current controls vendor. Even with the assistance of the controls vendor, the buildings were still having issues. To make matters more complicated, the system had two headend computers which could only make limited changes to the controls programming. Building engineers were forced to manually bypass dampers and struggled to interface with the overtime air platform through these head end PCs.

The facility’s controls service partner at that time recommended that the building managers remove all of the Siemens and Johnson Controls hardware to create a complete Alerton system. With limited budget, the facilities team began looking for other options. They brought in teams of consulting engineers but nothing seemed to solve the issues they were having.

In early 2017, Computrols came in with a unique integration solution for these facilities. Rather than removing the existing infrastructure, Computrols’ technicians simply replaced the JACEs at each building with its lifetime warranty LX Controllers. The LX controllers were able to communicate BACnet to the Alerton equipment while simultaneously communicating Siemens’ Floor Level Network (FLN), Johnson Controls N2 protocol, and Modbus to the corresponding controllers. Through the LX, Computrols was able to pull in all manufacturers’ controllers into its intuitive CBAS Software. Not only that, but through working side-by-side with the facility’s operations team, they were able to program more dynamic logic to keep tenants comfortable and reduce energy consumption. They also successfully interfaced to the overtime air platform for more reliable scheduling.

Today, the facilities team at South Coast Executive Center is able to make adjustments to their BAS autonomously and utilize Computrols free 24/7 tech support when needed. The buildings located at Harbor Corporate Park have since sold to a new owner. At the time of sale, Computrols technicians installed a new head end Computer at this facility and trained the facilities team there on how to manage the system. At the end of this project, the customer said, “Computrols has these buildings running better than they have in years.”