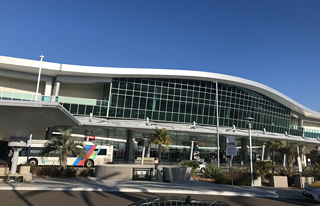 To continue to leverage the new Delta controllers as long as possible while giving the facilities team better control of the system.

The existing Delta Controls installation never operated properly and did not allow the facilities team to properly control their HVAC system.

The Rental Car Center at the San Diego International Airport opened in January of 2016. The 2-million-square-foot facility is located just off the Pacific Highway and houses most of the rental car companies serving the San Diego Airport.

During the building’s construction, it was equipped with a new Delta Controls system but the installation was left incomplete by the initial contractor. When the facilities team started each day, their building automation system would have over 200 alarms. With this many alarms, it was impossible for the in-house team to address each one. As a result, the system’s alarms became counterproductive. The staff asked for support from their installer to repair this but received minimal assistance.

As a result, the system never worked properly. To complicate matters, the front-end software was too convoluted for anyone on the facilities team to navigate. They received very little training from the installer, limiting them to changing setpoints to control the HVAC. This left the building’s staff with inconsistent control of the indoor environment and at times, some uncomfortable conditions for those working in and visiting the facility.

Given that the system was only a couple of years old, the property’s management team did not want to have to start from scratch. In January of 2018, Computrols presented a solution that would allow them to leverage their existing investment but gain better control over their HVAC system. Computrols technicians integrated with the existing Delta controllers by replacing all of the “parent-level” controllers with Computrols LX controllers and Computrols Building Automation Software (CBAS).

Although the Delta system was all but brand new, the Computrols integration has given the facilities staff a significant boost in reliability and usability. Since the installation was completed, the onsite team has been able to fully manage the system themselves. As a result of Computrols technicians thoroughly commissioning the system, there are now only a handful of alarms to be addressed on a daily basis. The San Diego Airport Rental Car Center has since been a much more comfortable facility for employees and travelers.

Quote from the customer: “We’re all very impressed with the new system. Everything with our old one was so complicated and we could only do a few tasks but with this one, we’re able to make changes easily and see everything it’s doing. I’m excited to keep using it and make more adjustments to get it even more dialed in.”