Home » What We Do » Our Clients » Building Automation Case Studies » Case Study: One Shell Square 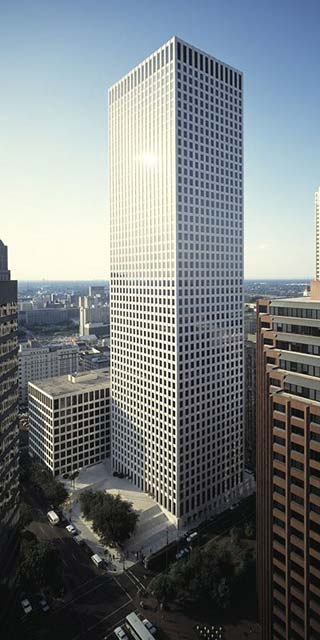 One Shell Square is a 51-story, 697-foot skyscraper located at 701 Poydras Street in the Central Business District of New Orleans, Louisiana. It is the tallest building in both the city of New Orleans and the state of Louisiana.

In 1997, the facility’s property management team was seeking a new building automation vendor who could give their in-house engineering staff better control of their HVAC system. The building, at that time, had a Johnson Controls system that could only be manipulated by the manufacturer resulting in constant service calls and poor temperature control.

The property management team selected Computrols as their new building automation vendor not only because they offered an intuitive user interface to their building engineers, but also because they were able to leverage their existing JC 85/40 controllers. This allowed management the ability to upgrade the buildings controls overtime, rather than completing a costly retrofit.

Computrols technicians performed a head-end replacement to interface to the existing system and as the old controllers began to fail, they were replaced by Computrols lifetime warranty controllers. The building’s engineering team quickly became proficient in Computrols Building Automation Software (DOS version) and was able to improve its control of their HVAC system and lower energy costs.

Soon after the HVAC integration, the building’s management brought Computrols back in to integrate to their existing fire and life safety system, tying it into Computrols Building Automation Software (DOS Version). This integration gave the facility managers the ability to monitor both systems under one software platform.

In September 2009, Computrols upgraded the BAS at One Shell Square from it’s DOS-based software to its new Windows-based software giving the facilities team access to the latest technology in building automation.

Later, the team also added a new voice Evax system with customized messages that would alert building occupants during a fire event. Two years later, the Computrols team also put in its CSimon fire panels and moved the SLC circuits from the legacy Fire One system to the CSimon platform.

Beginning in 2014, Computrols was brought back in to retrofit the properties initiation devices, changing end devices from conventional to fully addressable devices. The new addressable devices will allow emergency personnel to provide more accurate and detailed early notification, making for a safer facility.