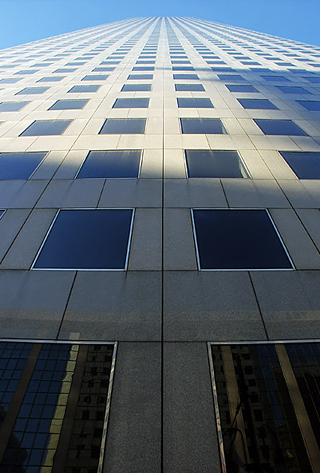 To be compatible with existing controllers while offering a simple-to-use building automation software.

Allowing engineering staff to have full control of the building automation system.

The JP Morgan Chase Tower was designed by I.M. Pei and Partners in the late 70’s and was completed in 1981. Today it remains as an achievement in modern building architecture and design. As it stands as the largest building in the state of Texas, the building requires 2 central plants (basement and upper), which present engineers with a unique challenge.

The building was originally fitted with a Johnson Controls building automation system. In 1999, management was demanding better performance, more control, simplicity, and serviceability. The most cost-effective solution to meet these needs was a Computrols “head-end replacement”.

Over subsequent years, pneumatic controls were gradually replaced on the multi-zone floors as tenant build-outs and budgets permitted. Each build-out included Computrols X-Line Controllers as the standard for controlling each floor’s HVAC equipment.

In 2009, Computrols provided the property’s engineering staff with training on the installation of their HVAC controllers and worked with management to develop a standard floor sequence. This empowered the property’s facility management team to install their own controls on subsequent floors—reducing installation costs and promoting in-house expertise. By having the ability to install the lifetime warranty DDC controllers and program the system in-house, ownership saved an estimated $400,000 in labor costs.

In 2014, Computrols was hired to replace the controls in the upper plant bringing the entire building to a new energy-efficiency standard. Since that time, CBAS Web has been installed, allowing for the building’s tenants to schedule their overtime air on Computrols’ online portal. This solution not only made the facility more sustainable, but also created a new source of revenue for ownership.