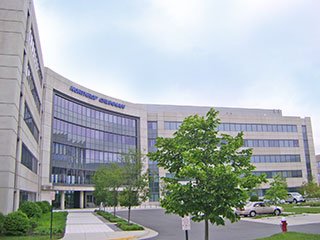 To reduce energy bills and usage while creating better tenant comfort and convenience.

Independence Center I is part of the Westfield Corporate Center along Route 28, one of the D.C. metro area’s largest and most well-recognized business parks, only minutes from Dulles Airport.

The HVAC/mechanical system at Independence Center I is based on a complex and flawed design that dates back to the original construction of the building. Each of the two towers has two air handlers per floor which supply conditioned air to electronic VAVs on each side of the floor. The problem is that both air handlers are connected to a common supply air duct that makes a complete circle around the floor. Regardless of whether one air handler or both are running, air will move around the circular duct to all VAVs. Although each air handler is supplied with a VFD and an isolation damper to prevent backflow, one air handler cannot supply the minimum flow to all VAVs on the floor.

The original Johnson Controls system was incapable of producing a control strategy to handle partial occupancy on the floor. To exacerbate this situation, there were several tenants with a small footprint that paid for 24-hour occupancy. The end result was that both air handlers would run 24/7 on all floors containing these full-time tenants, even though they only occupied a small space. Johnson Controls technicians had worked on this problem for years and spent a great deal of time on-site trying unsuccessfully to solve this problem.

Computrols arrived in 2005, solving this and a host of other problems by replacing nothing more than the front-end computer system and a few large network controllers. By leveraging Computrols Building Automation Software’s powerful, yet simple, IF/THEN Logic and Metasys™ communication drivers, Computrols was able to implement an effective control strategy. By directly communicating with the existing Johnson Controls VAV controllers at a low-level, CBAS could force individual VAV dampers closed during unoccupied hours. This was something that Johnson Controls’ VAV firmware did not support and therefore, was never able to accomplish. By forcing the VAVs closed, isolating the unused air handler, and pushing air to only the occupied VAVs, Computrols was successful in running a single air handler in low-occupancy times. This approach produced tremendous energy savings.

Other improvements included central plant optimization and a web-based overtime server for tenants provided through the utilization CBAS Web. CBAS Web provided tenants with a simple, online portal to schedule their overtime air and lighting while giving management the ability to automate the billing process.

The project was completed in under one month with no tenant inconvenience and produced a payback period of 6 months. Computrols has since made many improvements at the site and Independence Center I was awarded ENERGY STAR® accreditation in 2013 and 2014 for its operating efficiency.