Home » What We Do » Our Clients » Building Automation Case Studies » Case Study: 601 Travis 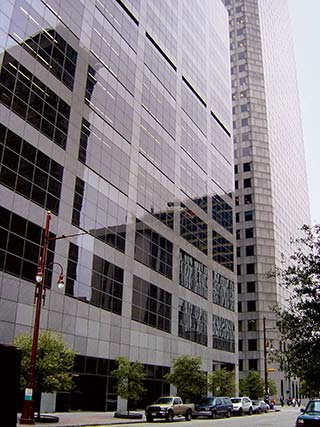 To have the flexibility to control the building automation system in-house and generate customized sequences to make the building more energy efficient.

601 Travis was originally equipped with a Johnson Controls building automation system, which remained in place until 2014. At this time, management became frustrated with the system. They were not able to control the building to their standards and service technicians were not capable of making the necessary changes to remedy their issues.

In 2014, they allocated budget for new plant controls and started working with Computrols. Computrols was able to replace the plant controls, provide a new CBAS head end computer, and interface to the existing Johnson Controls’ controllers throughout the building, effectively replacing the entire control system all within the central plant budget. With Computrols building automation system, engineers now have complete control of their HVAC system.

As one example, Computrols’ system has allowed them to bypass the “canned” software in the Johnson Controls UNT controllers and replace it with a customized control solution for the air handlers. The new sequence of operations being used on the floors was not possible with the Johnson Controls system.

With some additional training, the engineers at 601 Travis now have the ability to write sequences and service their own BAS.